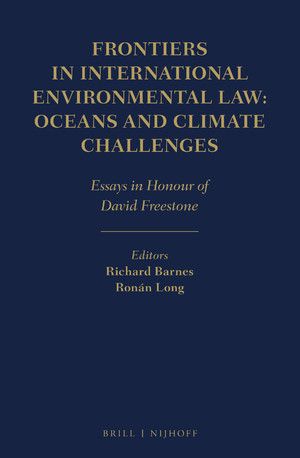 Frontiers in International Environmental Law: Oceans and Climate Challenges - Essays in Honour of David Freestone is an open access publication that explores how law and legal scholarship has responded to some of the most important oceans and climate governance challenges of our time. In the the first chapter, the editors, Professor Richard Barnes, Professor in International Law and Research Impact Lead at the University of Lincoln, and Professor Ronán Long, Director of the WMU-Sasakawa Global Ocean Institute at the World Maritime University (WMU), note that the collection, “celebrates the contributions of Professor David Freestone to our understanding of international environmental law, particularly law of the sea and climate law. In doing so, it seeks to reflect his contributions by making its own mark on how we understand these fields of academic inquiry, as well as the realpolitik of international law-making on some of the most pressing and complex sustainability issues of our time.”

Using the concept of the frontier, each contributor provides a unique perspective on the way that we can understand and can shape the development of law and legal institutions to better protect our marine environment and climate system, and reduce conflicts in areas of legal uncertainty. The authors show how different actors influence legal development, and how legal transitions occur in marine spaces and how change influences existing legal regimes. They also consider how change creates risks for the protection of vulnerable environments, but also opportunities for creative thinking and better ways of governing our environment.

Professor David Freestone is a Professorial Lecturer and Visiting Scholar at George Washington University Law School in Washington D.C. He is the Executive Secretary of the Sargasso Sea Commission, established by the Government of Bermuda pursuant to the 2014 Hamilton Declaration on Collaboration for the Conservation of the Sargasso Sea, now signed by ten governments, that is working to protect this unique high seas ecosystem. The project was awarded the International SeaKeepers Prize in 2013. He is also founding Editor of the International Journal of Marine and Coastal Law (now in its 36th year). From 1996-2008 he worked at the World Bank in Washington DC, retiring as Deputy General Counsel/Senior Adviser. From 2008-2010 he was the Lobingier Visiting Professor of Comparative Law and Jurisprudence at the George Washington University Law School. He was the Ingram Fellow at the University of New South Wales in Sydney in 2009 and has held visiting positions at the Fridtjof Nansen Institute (2014-18), University of Cape town (2016) and the Oxford University Martin School (2018). In 2008 he was awarded the Elizabeth Haub Gold Medal for Environmental Law.